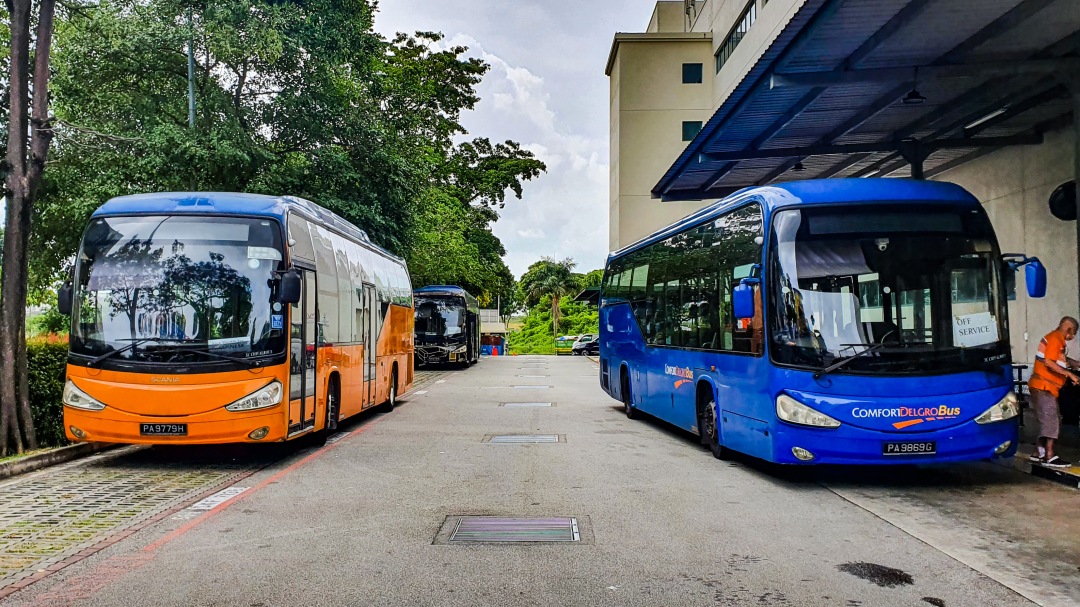 The final three Scania holdouts – PA9558D, PA9772B and PA9779H – have now “graduated” from NUS in end-2021, as ComfortDelGro Bus released them from the ISB fleet. They ended up at the Tampines Retail Park shuttle, operating alongside their cousins who retired from NUS duties much earlier.

It is probably worth a mention here that since April 2021, Courts has withdrawn from the Tampines Retail Park shuttle operated by ComfortDelGro, and instead runs its own minibus shuttle to Tampines MRT which is contracted to Leisure Frontier. ComfortDelGro continues to operate shuttles between Tampines Retail Park (ie Giant and Ikea) and Bedok, Tampines, Pasir Ris and Sengkang MRT.

Scania K230UBs ply the Tampines and Bedok routes which run daily, unlike the other routes that run only on weekends. A few of the buses still have the old advertisement wraps, with Courts awkwardly removed.

Others have been rewrapped with an updated design that omits Courts and also features the new Giant logo.

PA9558D was the first to leave NUS in June 2021, in the middle of the vacation. It had its NUS logos removed, albeit hastily – even as of 2022, traces of the NUS logo shape remained on the bus. Note that the rectangular metal holder, where NUS OCA would have placed “please show your NUS ID” signage, is still mounted at the front.

As I have not managed to get a proper photo of the bus, please refer to this photo from my friend for the time being. There was once I was right behind it in my car. Unfortunately, I was also at the wheel of said car.

PA9772B and PA9779H went over somewhat later. From May to July 2021, PA9772B sporadically operated on the Science Park shuttle service (usually performed by plain-orange Scanias extraneous to the Sentosa fleet) with the NUS logos covered in white paper. As it was the vacation, an ISB driver used the bus to perform those duties.

Later on in October, it was spotted together with PA9779H temporarily parking in the Sentosa coach park, among other fully-orange Scania K230UBs that were used on Sentosa services during peak holiday season and Science Park shuttle services during off-peak season. The NUS logos were still papered up.

PA9779H was in somewhat decrepit condition; the NUS logos were removed in a much cleaner manner than was done with PA9558D but the paint was peeling all over the bus and something I can only presume to be moss was even growing on the rear windscreen.

Based on the traces on the livery, I think the NUS logos were not scraped off of PA9772B – the black wrap was simply applied over them.

Unfortunately, the bus was ending its trip when I snapped it, so I did not get a chance to board. Here’s a look at the rear, complete with plain paper that NUS stuffed into the rear EDS housing, and the strange spelling of “Seng Kang” that I have never seen anywhere else.

Meanwhile, PA9779H stayed in its ISB colours without logos – it appears they cleaned the bus up before using it.

It looks much more presentable now, and the interior air-conditioning was quite strong as well.

No, your eyes are not playing tricks on you – the signage on the bus says “TAMPINESE” instead of “Tampines”. This signage looks to be a new piece of paper that was quickly produced for PA9779H, as it’s printed in Calibri instead of the usual Times New Roman. Ironically, PA9779H did have a copy of the Tampines shuttle signage when it was at NUS, but the entire stack of signs that it was buried in got thrown into PC3853E.

The rear of the bus – the ISB livery never featured an NUS logo on the rear by default, so there was nothing to remove from here, except the strange green moss on the window.

The bus interior remained unchanged from the NUS days, complete with outdated NUS signage admonishing passengers not to eat and drink. Though of course this can’t beat the time a “Have You Left Anything Behind” sign was left behind in PA9794M.

Otherwise, the interior is exactly as we left it. It was quite interesting to see these exact buses now move on to duties elsewhere. While I have snapped and ridden ex-ISBs in other places before, I never rode on those buses in NUS since they were retired from service before I matriculated.

However, I suspect that these Scanias may not see service for much longer. As the NUS ISB fleet transitions to electric buses from 2022, the displaced Volvo B9Ls will likely be redeployed to other contracts as was the case with their Scania predecessors. Sentosa is also going fully electric soon, so that leaves Science Park and Tampines Retail Park as likely candidates for the B9Ls in the long term. At that point, the time will likely come for the Scanias to be retired fully as many of them have deteriorated by quite a bit. Enjoy them while you can!