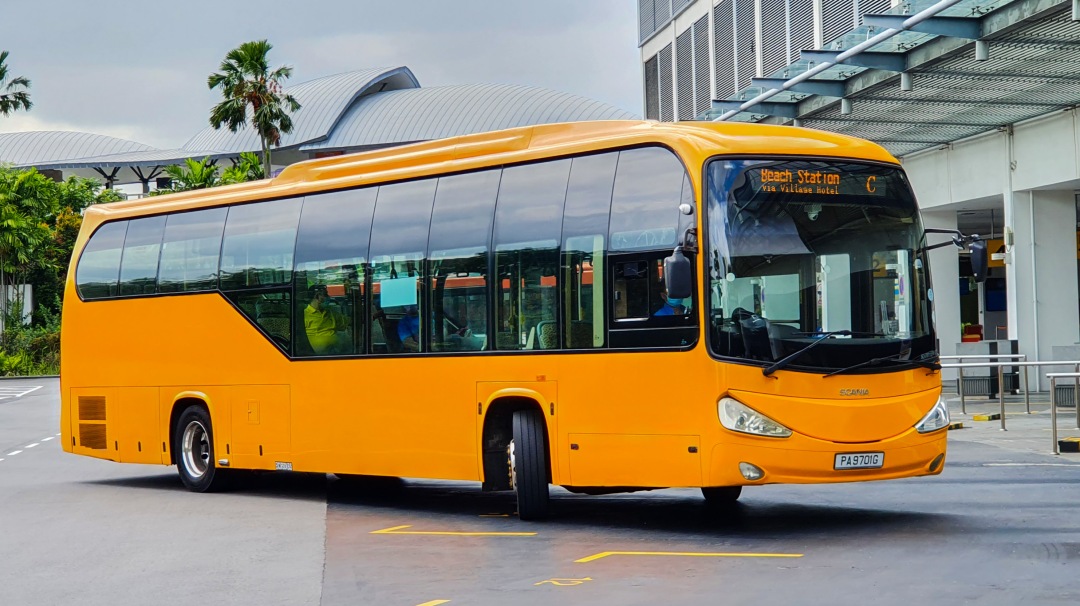 Since late 2020, the Scania K230UB buses at Sentosa have had their EDS repaired and programmed with data for the Sentosa Bus routes.

Previously, they operated with the EDS turned off and using yellow destination signboards on the front and side. Eventually, in late 2020, they were fitted with a tablet-like controller in place of the original controller. This tablet is a smaller version of the Kabym AL-K80 retrofitted to the ISB Volvo B9Ls in 2020. This might be because the EDS units in the Scanias are compatible in some way with the ones in the Volvos (as far as I am aware, they are not from the same manufacturer, and the Scanias’ EDS was not replaced).

The EDS follows the same layout as the ones on the Liannex-bodied Volvo B8RLEs, but with different fonts. It shows the route letter on the right, but in a serif font which is unusual for EDS displays (I think it is a default Chinese font). On the left is a centred destination (which in the case of most routes will be Beach Station) and a scroll listing the en-route stops.

PA9757X was spotted on Bus B, demonstrating the EDS format.

PA9442D offers another view of the Bus B EDS, which displays “Sentosa Cove V.” as an en-route stop.

PA9701G is seen here on Bus C, demonstrating how the destination is sometimes repeated on the bottom line – here it is heading to “Beach Station via Beach Station”.

Interestingly, there is also a dataset for the Golf Club Shuttle which was seen on PA9757X. Unlike on other bus models, the EDS format follows that of a normal letter-coded route, in this case coded “GC”. The destination of the bus is displayed as “SGC ClubHouse” (I presume the other direction would have “Harbourfront Interchange” as the destination).

EDS datasets for Bus A and D were not spotted, but I believe they exist.

The Scania K230UBs at Sentosa are operated by ComfortDelGro Bus, and are the former third generation of ISBs that retired from duty after being replaced by the Volvo B9Ls in 2015.

One thought on “New EDS Data for Sentosa Scania K230UBs”