Due to the Covid-19 situation in Singapore in 2020, NUS Open Day 2020 was cancelled and replaced with an e-open day from 26 February to 5 March. So let’s take a look back, from a bus-spotter’s perspective, at the buses of Open Day 2019.

Open Day 2019 was an interesting experience for bus spotters, as are most university open houses – a large fleet of buses from various operators was chartered to do campus tours and shuttle services, alongside the regular university ISBs.

As I had other things to do on the day, I wasn’t able to cover the entire fleet of buses deployed. The queues for campus tours at Town Plaza and Kent Ridge MRT were also quite a pain. Regardless, I stuck around to observe and focus on mostly the ComfortDelGro buses for this year, as the fleet from them alone got pretty interesting. 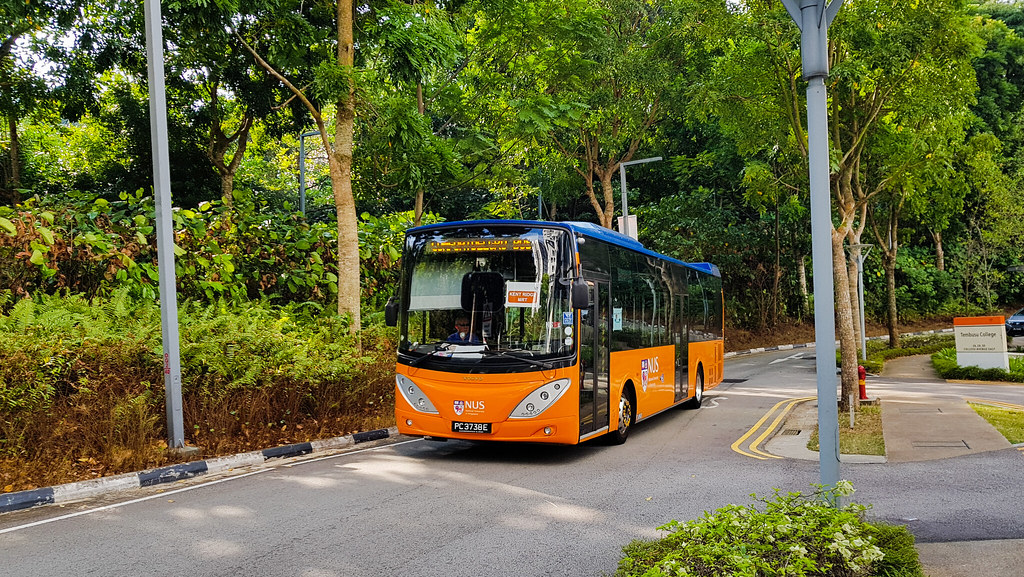 Residents of UTown were treated to the sight of three generations of current and former ISBs thundering past their doorsteps, a once-a-year occurrence. The routing of the MRT shuttles sent buses through the entire circumference of UTown, making for a somewhat noisy experience.

The shuttle from Stephen Riady Centre to Kent Ridge MRT was operated by a full fleet of current-generation Volvo B9L ISBs, making for a rather novel sight of buses in NUS colours driving past the residential colleges – although they did not stop. Of the three ‘abandoned’ UTown bus stops, only the Stephen Riady Centre one has seen actual ISBs stopping at it – this occurs every Open Day. 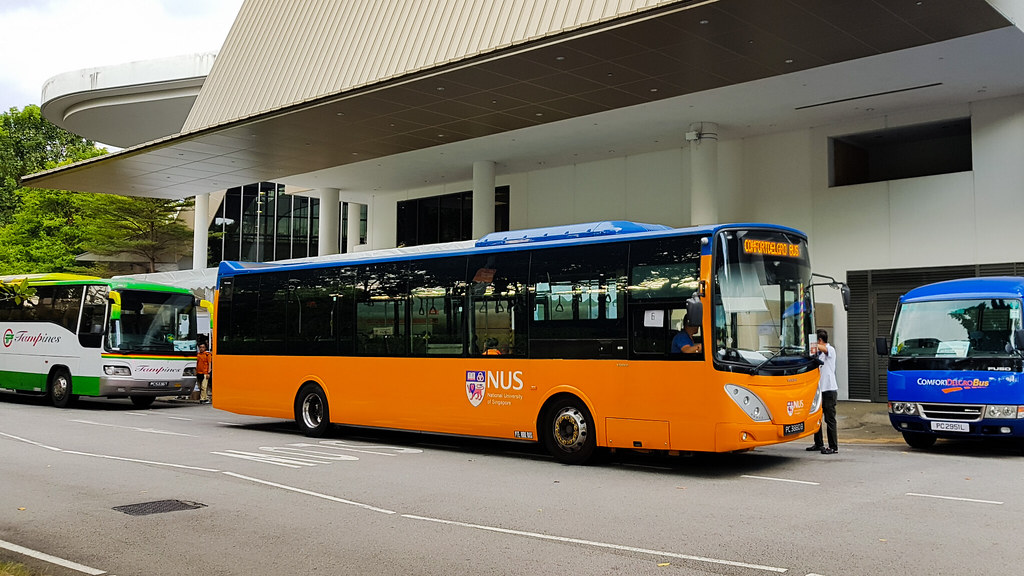 Tembusu College’s bus stop, meanwhile, is used as a car parking area, but the remains of the bus stop are unmistakeable. 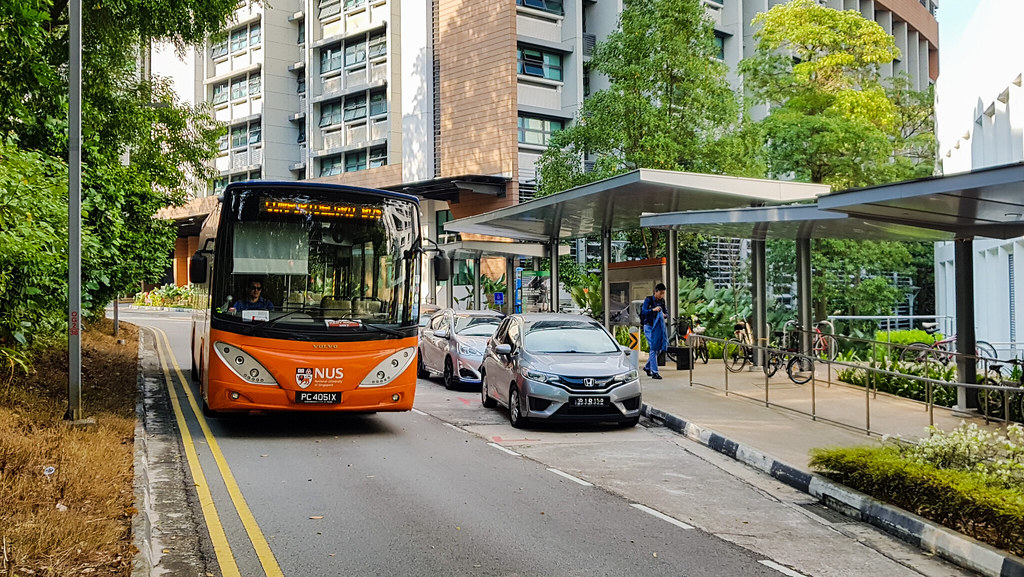 I stood outside Cinnamon College – where I live – to snap my first few shots. 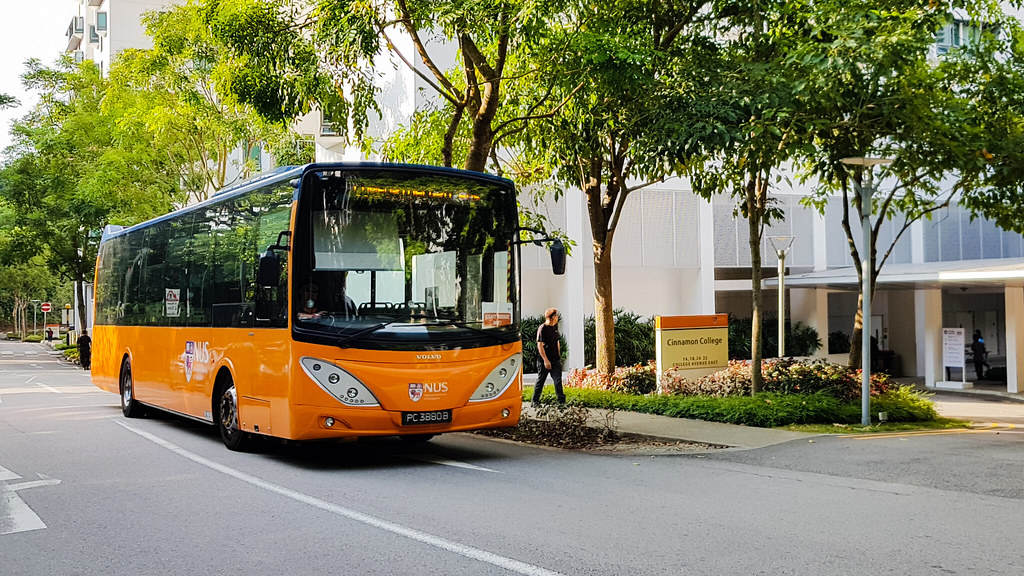 CAPT is right next to Cinnamon – immediately after passing me, the buses would make a quick right to pass it, sometimes having to cut into the opposite lane. 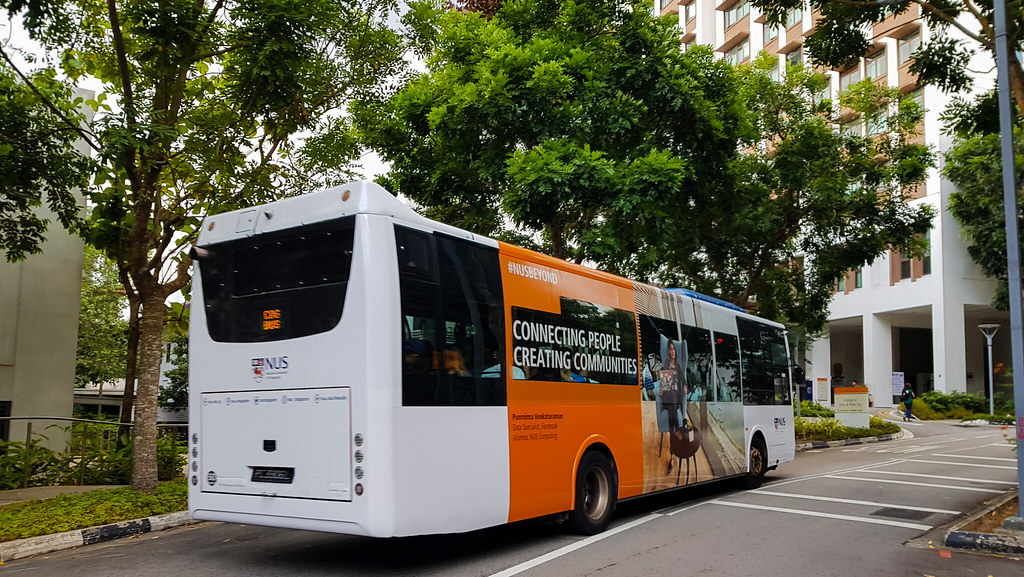 RC4’s bus stop was not cordoned off during Open Day, but a sign was put up exhorting drivers not to wait too long there. It was used as a private car/taxi drop-off point, while the ISBs drove past it. 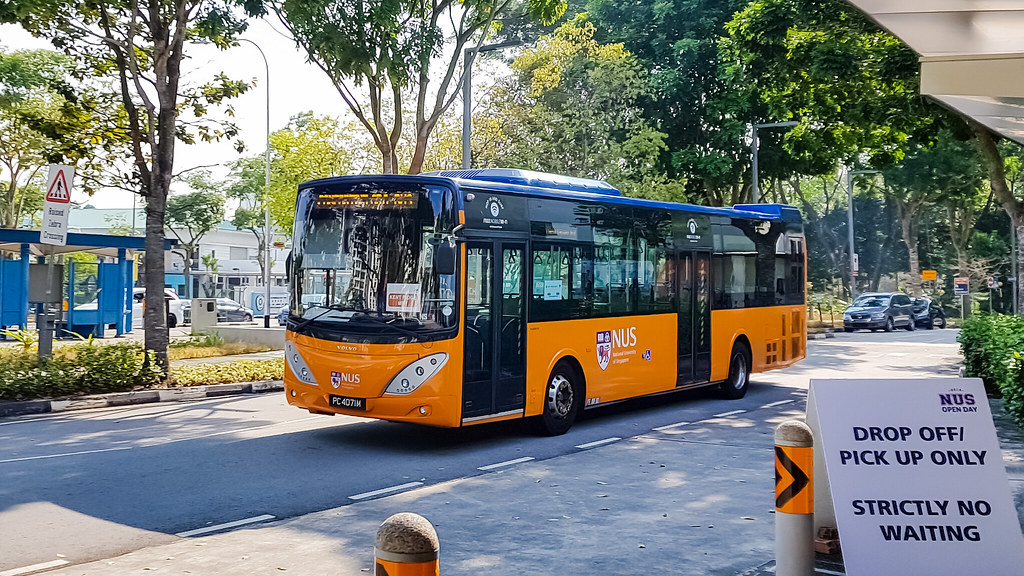 All buses entered and exited UTown from the entrance to Dover Road in the north. 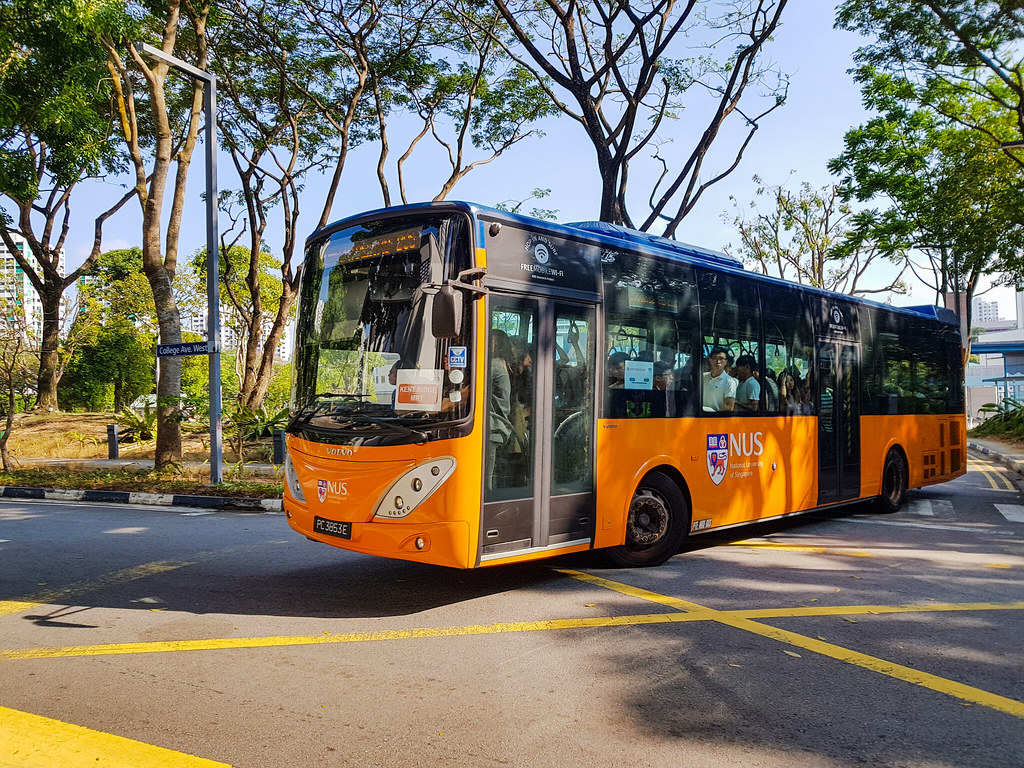 The fleet for the shuttle from SRC to Dover MRT was more interesting, comprising a mishmash of private coaches from ComfortDelGro and other operators, with three ex-ISBs thrown in.

First, we have a glimpse of the second-generation ISBs. Those were Japanese coaches like this Isuzu LT133P, and represented by PA6180D, which left the ISB fleet long ago and did many interesting duties before visiting its old home. Its identity as an ISB lives on, on the ComfortDelGro Bus website. 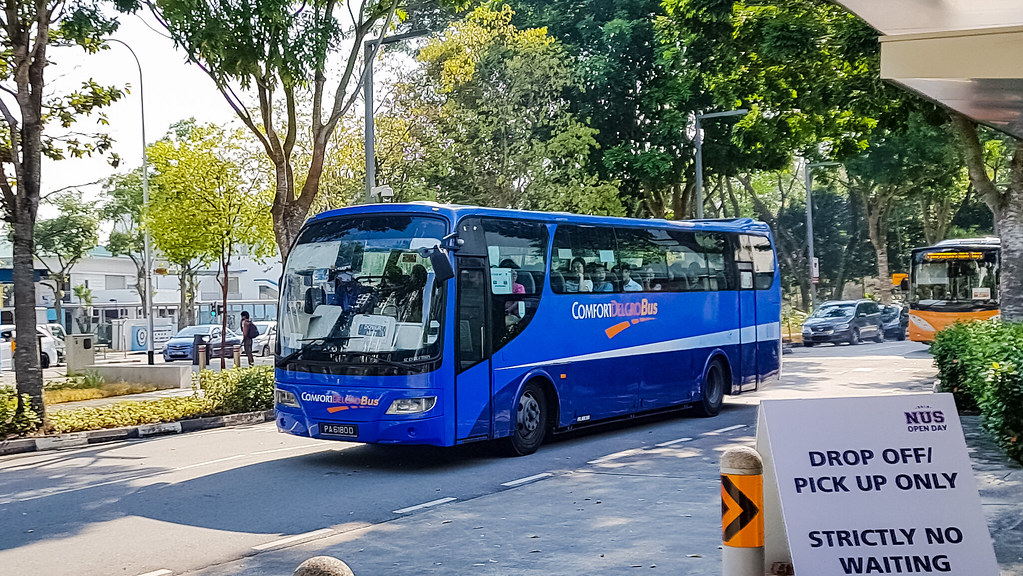 Meanwhile, the next (third) generation of ISBs are represented by two Scania K230UBs. PA9701G is an ex-ISB Scania K230UB, wrapped in a livery for International Business Park at the time of OD2019. It is now ferrying tourists around in Sentosa. 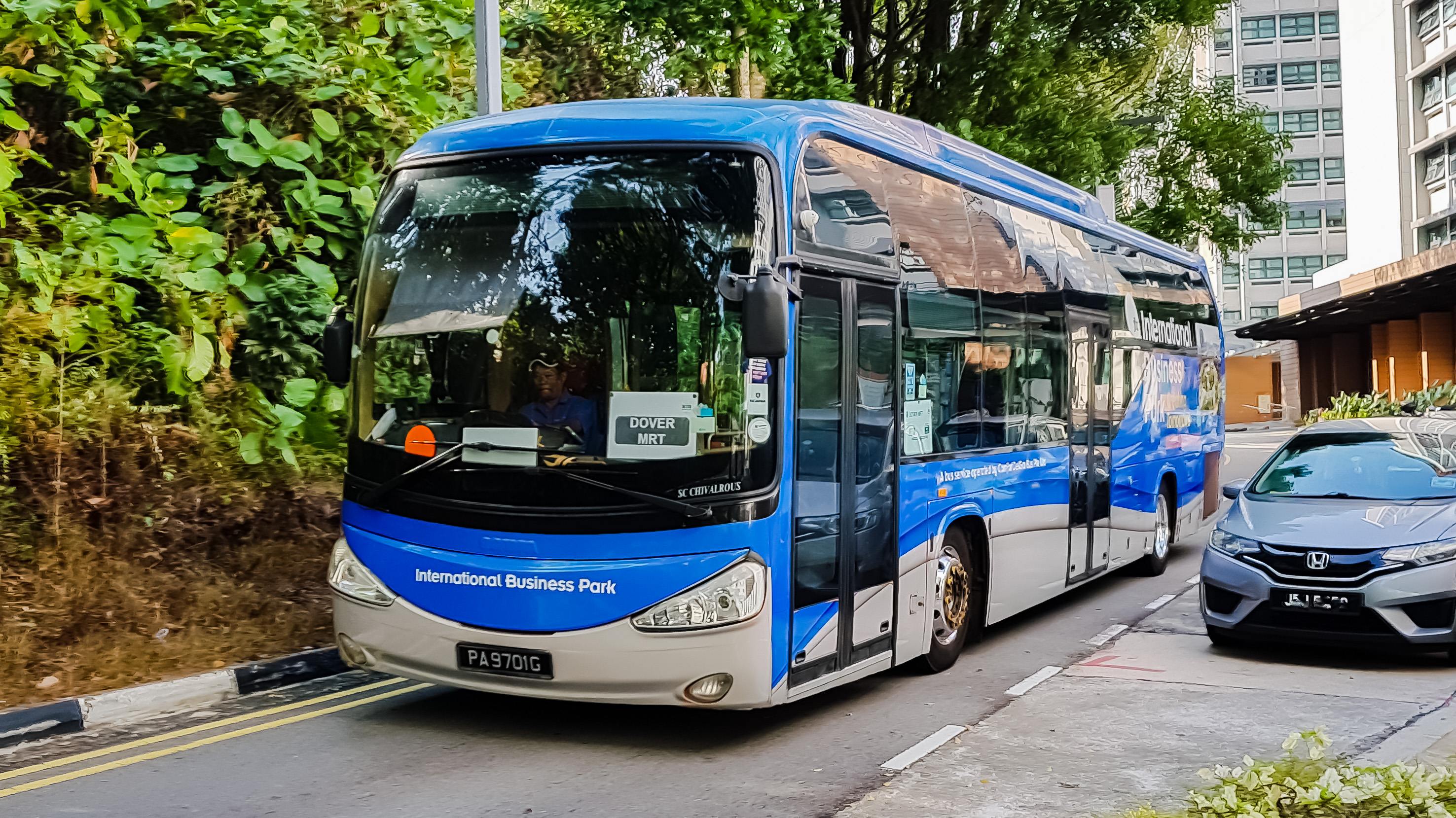 PA9442D is another Scania – one which still has its logos on, but covered up in white paper. Methinks this bus is the mysterious extra spare Scania that the bus uncles speak of – aside from the three active spares, there was always been a fourth Scania that remained NUS-equipped which I haven’t able to account for. Presumably it was this one, with its unscraped logos and Wi-Fi stickers! Later in 2019, this bus went to Sentosa as well. 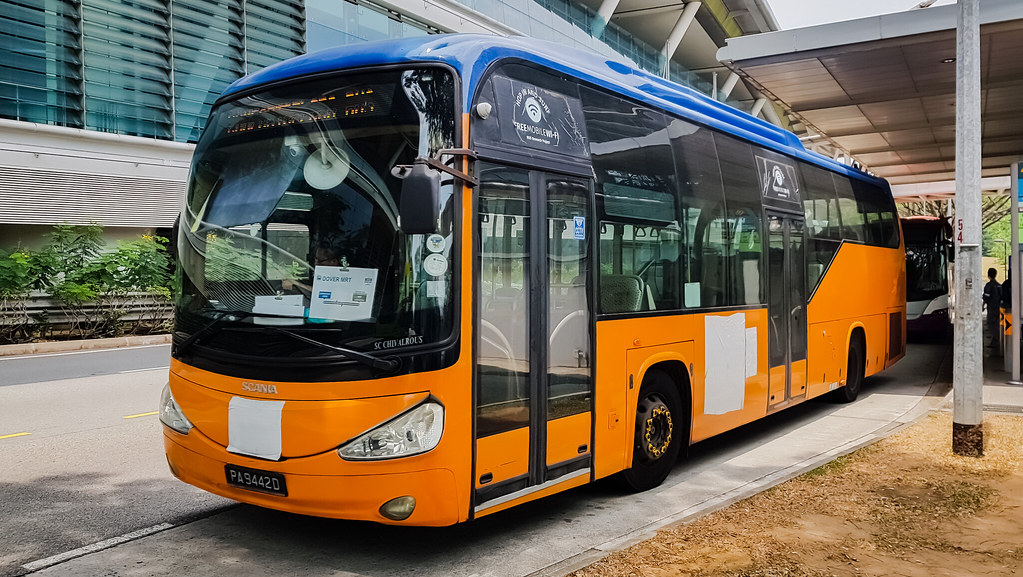 ComfortDelGro also deployed some of their newest luxury coaches on this shuttle. Their newest first-hand acquisitions are a fleet of Volvo coaches with Malaysian TruckQuip bodies, with a very striking design. 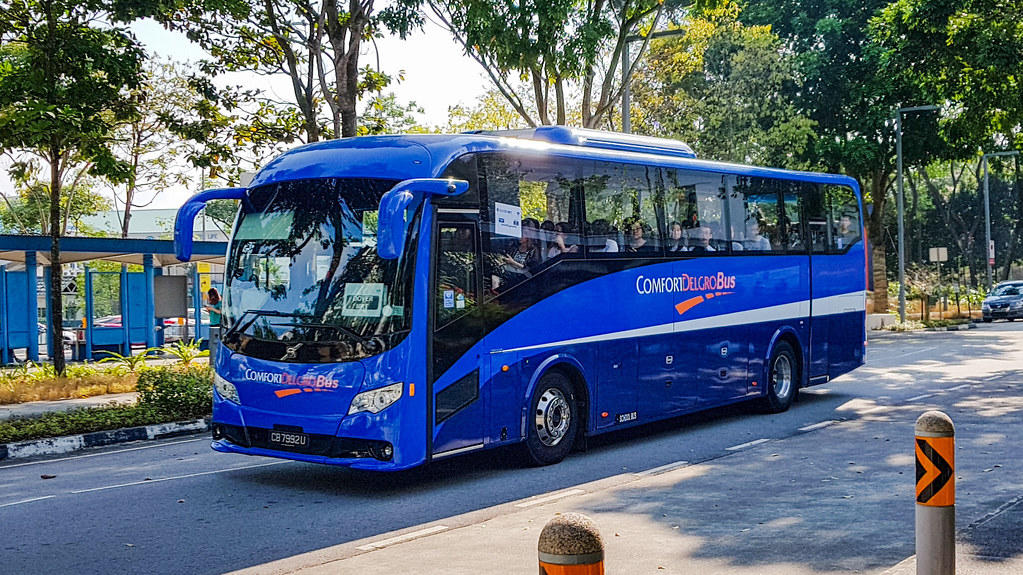 The newer Euro 6 B8Rs are represented here by PC7690G, passing by my home – Cinnamon College. Apparently, the B8Rs can be distinguished from their slightly older cousins by their rear door – which is in the middle of the bus instead. 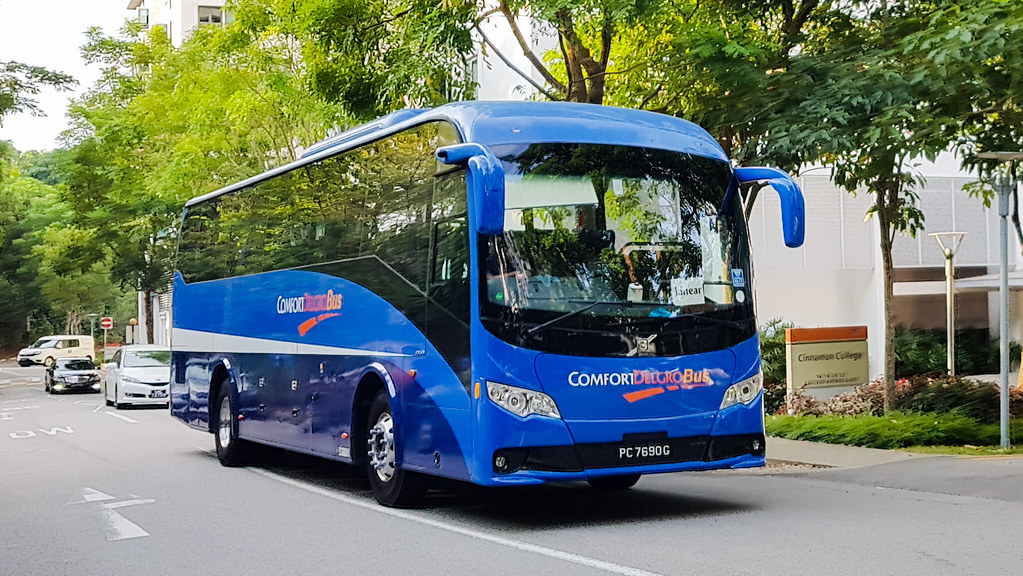 In 2017, competing charter bus company AZ Bus purchased a new fleet of high-end buses as well, from China instead. The buses they chose were Higer KLQ6128K model buses from Suzhou, also equipped with comfortable interiors and quiet engines. Developed together with Scania taking inspiration from their Touring model, they could almost give the Volvos a run for their money…

This rivalry did not last long, as ComfortDelGro bought out AZ Bus in 2018. So we had a chance to see these Higers plying the roads together with the Volvos, in the same colours. 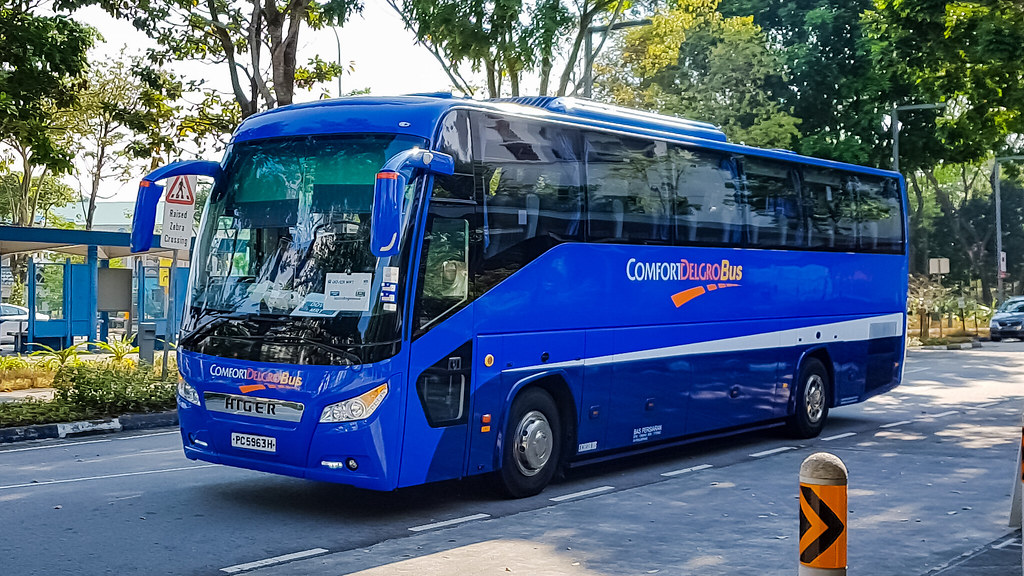 Speaking of ex-AZ Chinese buses, here’s a lone Yutong ZK6122HE9 flying past Cinnamon tailed by an ISB. This model has quite a solid appearance for a Chinese bus. Pity about the non-original hubcaps. 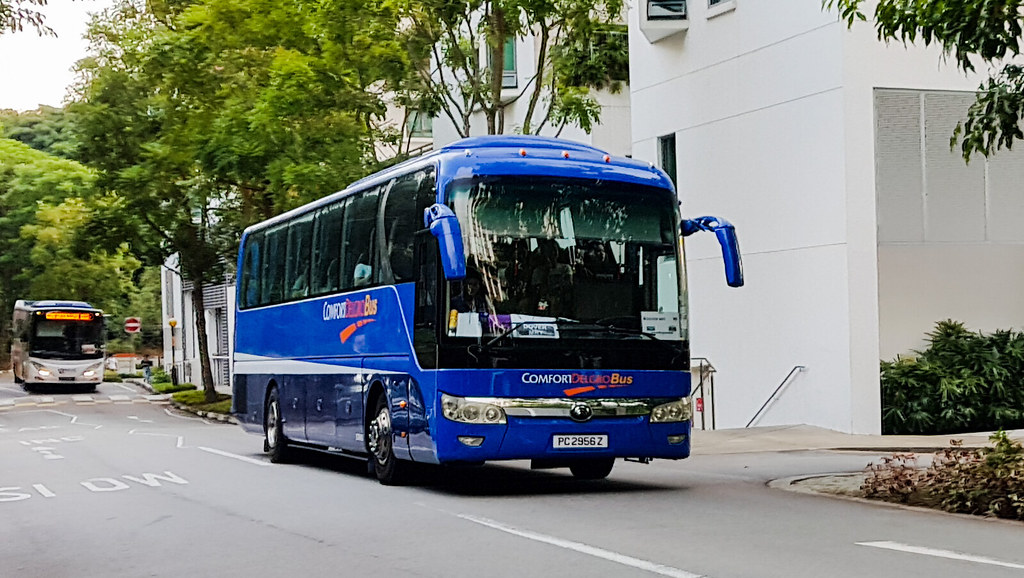 And finally, here’s a Scania K230IB coach which remained in AZ Bus colours during the open day. Hopefully they’ll get around to repainting the number plate when they repaint the rest of the bus. 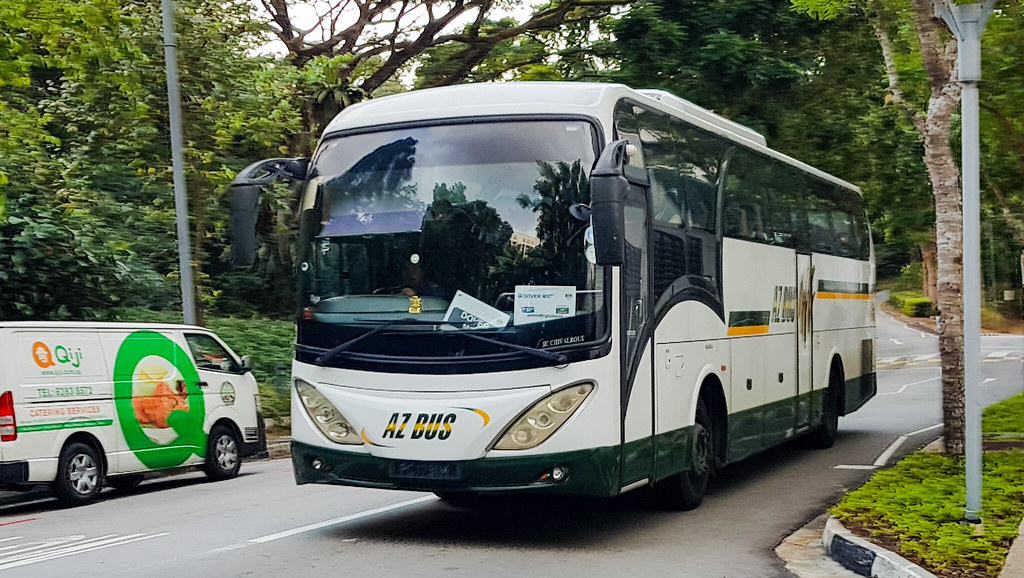 I began the day by snapping buses outside my RC at Cinnamon. I actually woke up early to catch the two training buses (to teach the ISB captains about driving the Kent Ridge route, the two senior bus captains crammed everybody into their buses and went one round on the route).

I even sat on the bench outside Cinnamon eating my packed breakfast, waiting for the buses to avoid missing them. But then someone I knew came over to talk to me. In the midst of our conversation, the two buses roared past.

Nevertheless, around 9am the actual operations began and the familiar-sounding Volvo buses were unleashed onto the roads of UTown.

Many of our ISB captain uncles were very intrigued to find out about the bus stops hidden inside UTown. They mostly agreed that it would be quite complicated to run a bus service around UTown, and that it would be noisy for us living so close to the road. 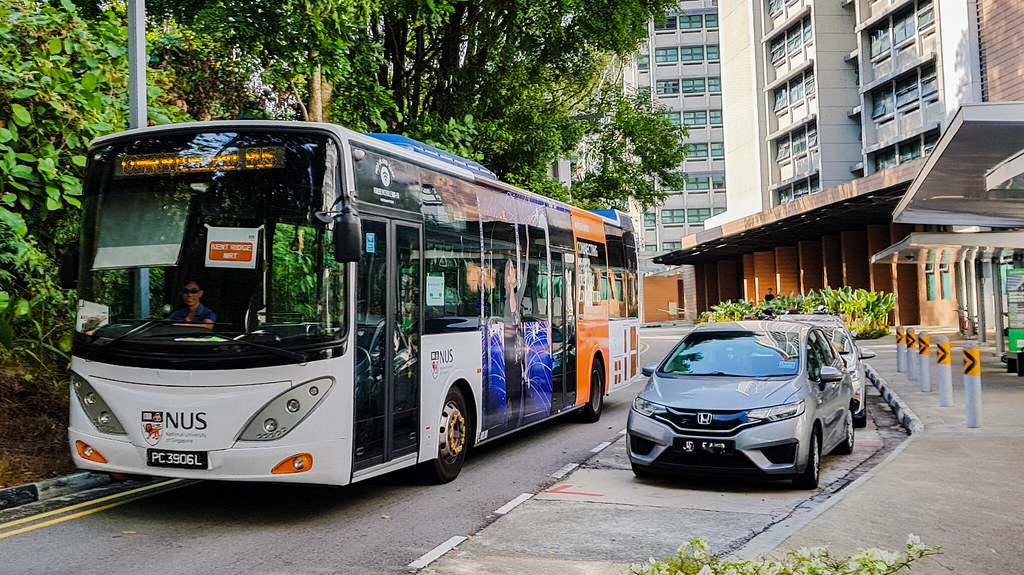 The uncles do, however, now have a newfound pity for those of us living in the RCs, who have to walk quite a distance to the Town Plaza bus stop. Many of them, having seen me snapping their buses from the roadside, asked me how on earth we manage to rush for classes from our rooms! 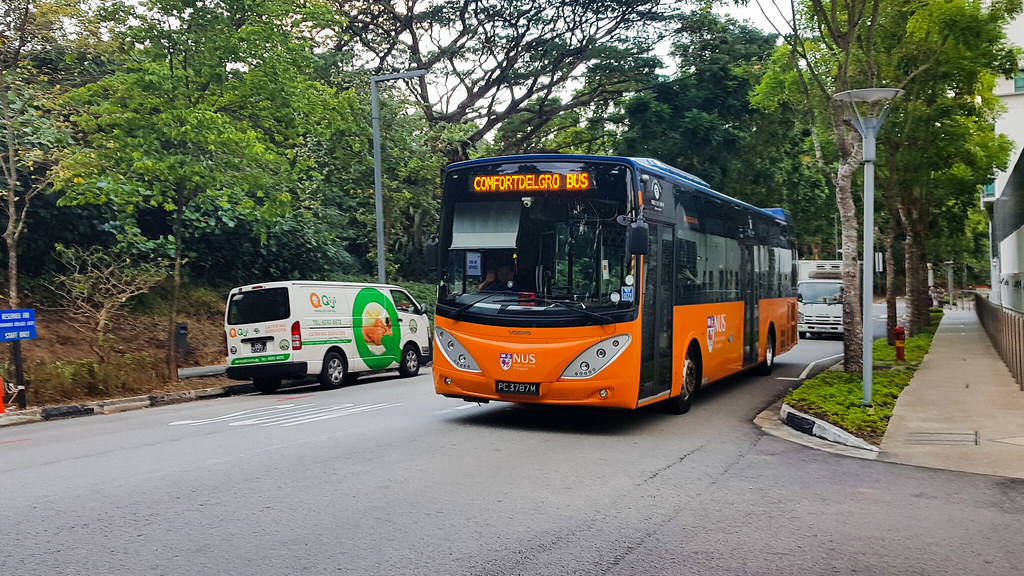 I guess this opportunity for the bus captains to understand student life is a welcome one. Rather fitting, then, that it should have occurred on Open Day!