As of Week 3 of the semester (26 August 2019), the U-turn used by ISBs along Kent Ridge Crescent outside the Lee Kong Chian Natural History Museum has been converted from a two-way U-turn to a one-way one. 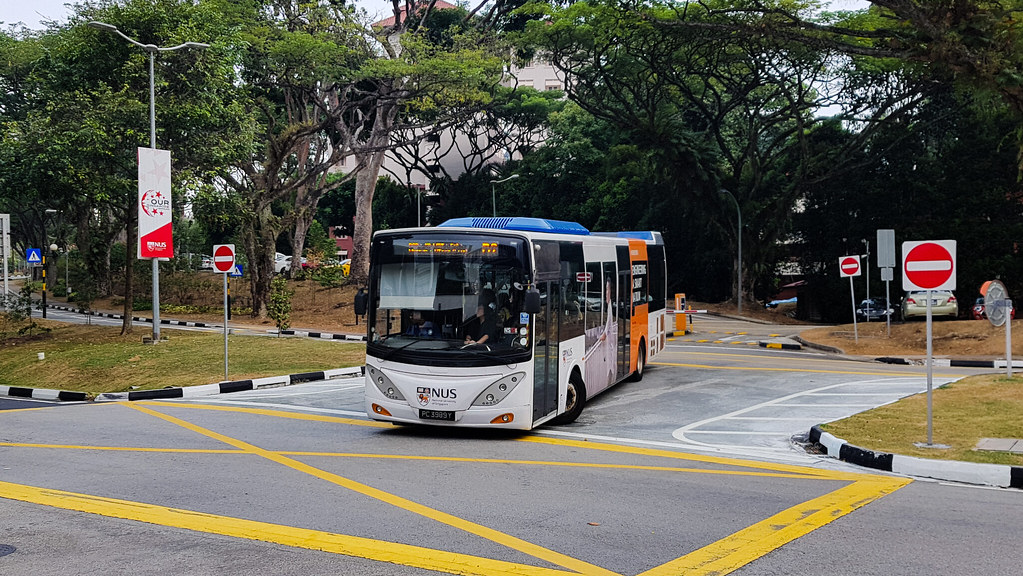 Technically, this U-turn is a section of Conservatory Drive that lies between the two directions of Kent Ridge Crescent. Previously, this section was two-way, so the area served as a road junction allowing cars from all over the junction to turn in any direction.

In order to serve the Museum bus stop, ISBs plying routes A2, D1 and D2 would make use of this section, as they would come down Kent Ridge Crescent heading westwards, then make a U-turn to reach the eastbound road and Museum stop.

However, this section was often dangerous as buses had to watch out for cars coming in the opposite direction (either making a U-turn in the other direction, or coming out from the museum and turning right). Sometimes, a car would end up pulling up alongside the bus, trapping both vehicles in a deadly embrace.

Now, the section of road has been repaved with new road markings. The entire section of the road is now one-way, heading north, thus allowing only vehicles turning right from westbound Kent Ridge Crescent (YIH area) into CP3, CP3A or eastbound Kent Ridge Crescent to use it. Cars exiting CP3/CP3A have to turn left and use the roundabout at College Link; their road marking has been repainted to only allow a left turn. 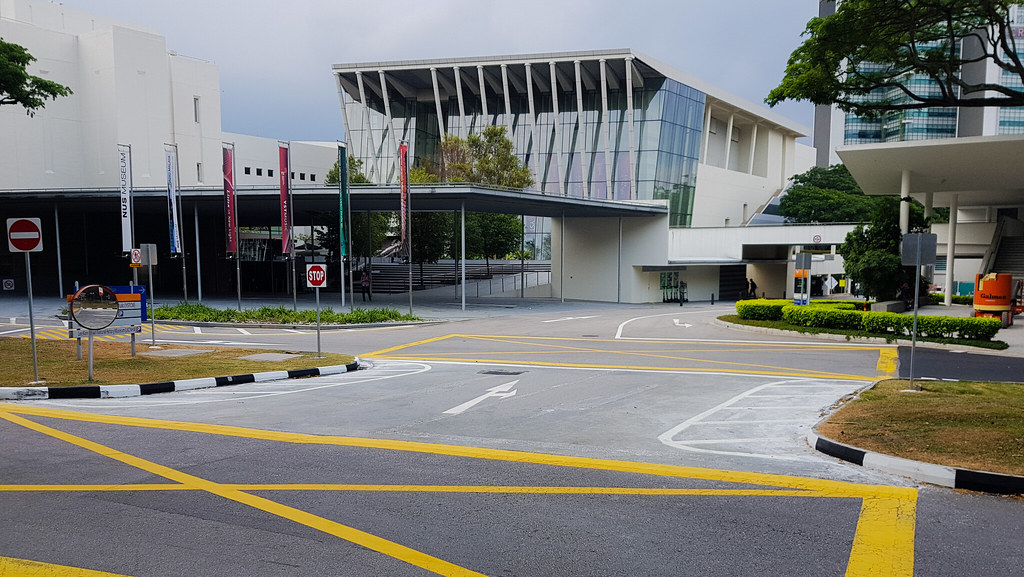 Vehicles coming from eastbound Kent Ridge Crescent (Kent Vale/UCC) can no longer U-turn here; they have to proceed further to the College Link roundabout to turn around. “No Right Turn” signs were put up in the vicinity of the section to alert drivers to the change. 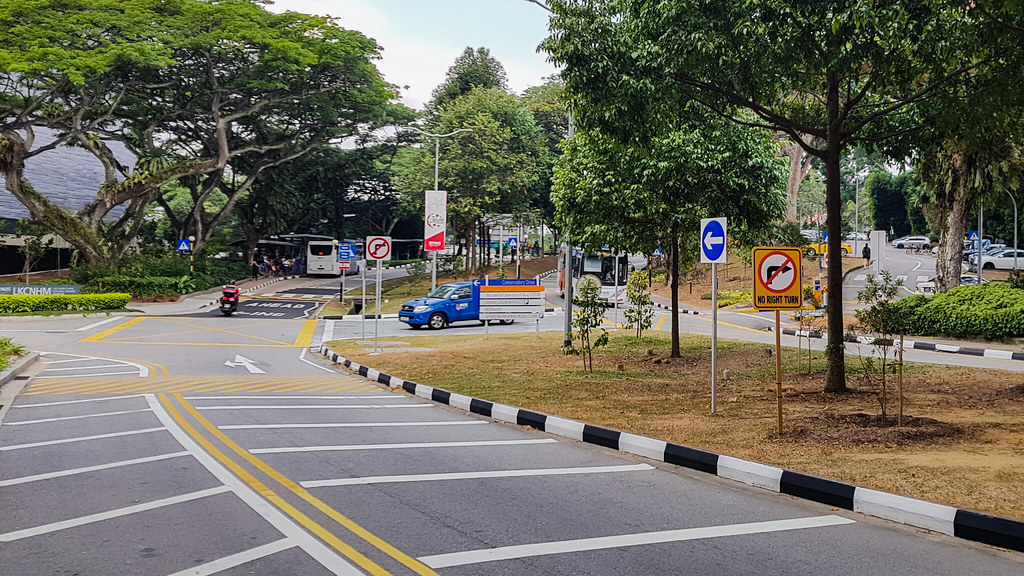 I noticed that there was a “No Entry” sign facing the exit of Raffles Hall as well, meaning that those cars cannot use the section to make a right turn directly. They have to turn left and use a smaller U-turn down the road if they want to head east. This was later removed.

On the first weekday of operations with the revised arrangement, many buses were seen continuing to hug the left edge of the road section, as the bus captains largely had not noticed the change in road markings. As you can see from the photos, this would result in the buses approaching very near to the kerb, since the driver would only turn the steering wheel when the rear wheel was in the middle of the road section (to allow space for an oncoming car). 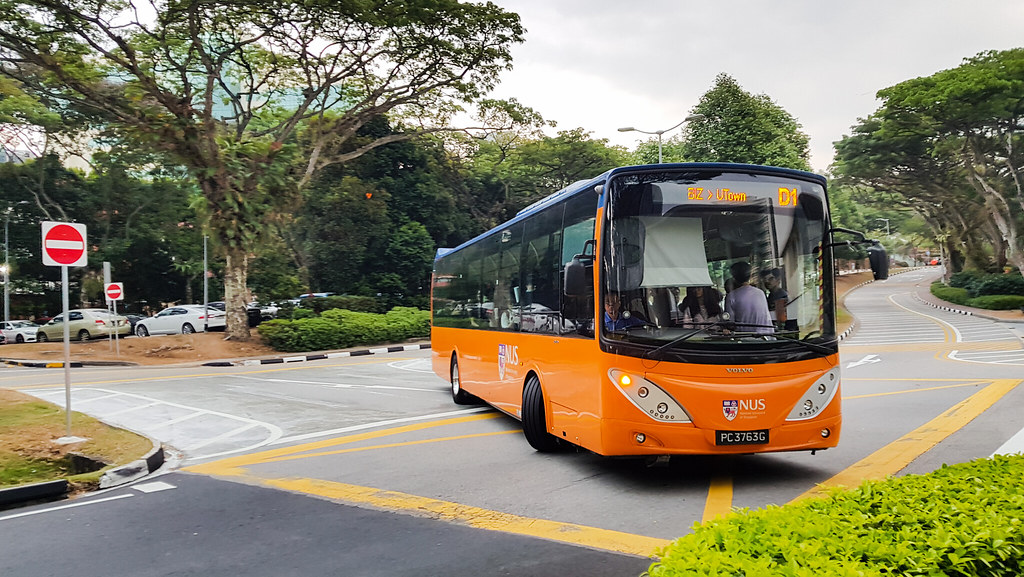 Many others, however, had noticed the change – presumably it spread around – and were taking advantage of the newly re-marked section of road to use the whole section to turn. 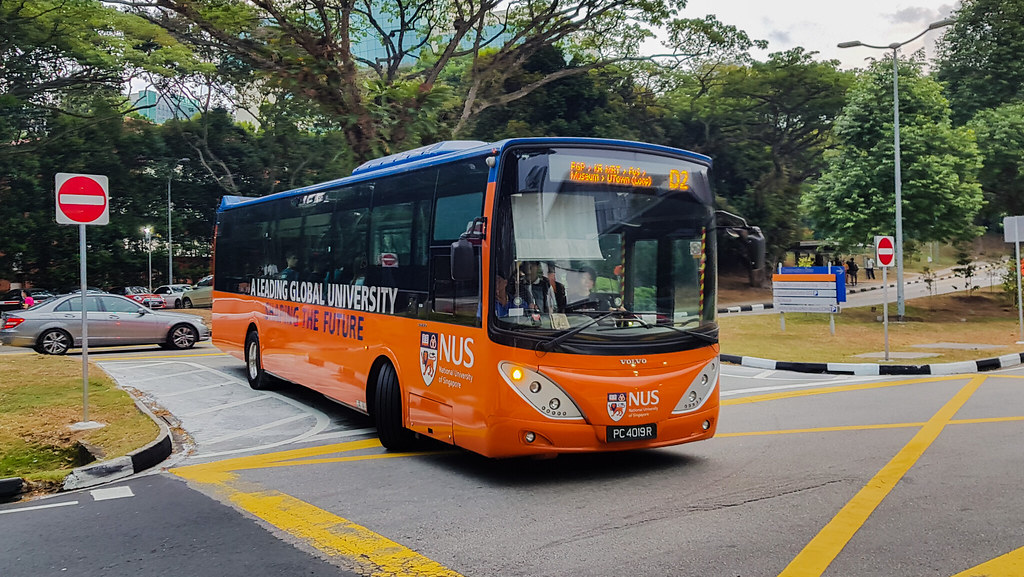 Being able to use the full section of the road to turn nicely allowed the bus captains to turn more smoothly, as they did not need to make two sharp turns in succession. They could instead turn in one curved motion, and stay far enough from the kerb. 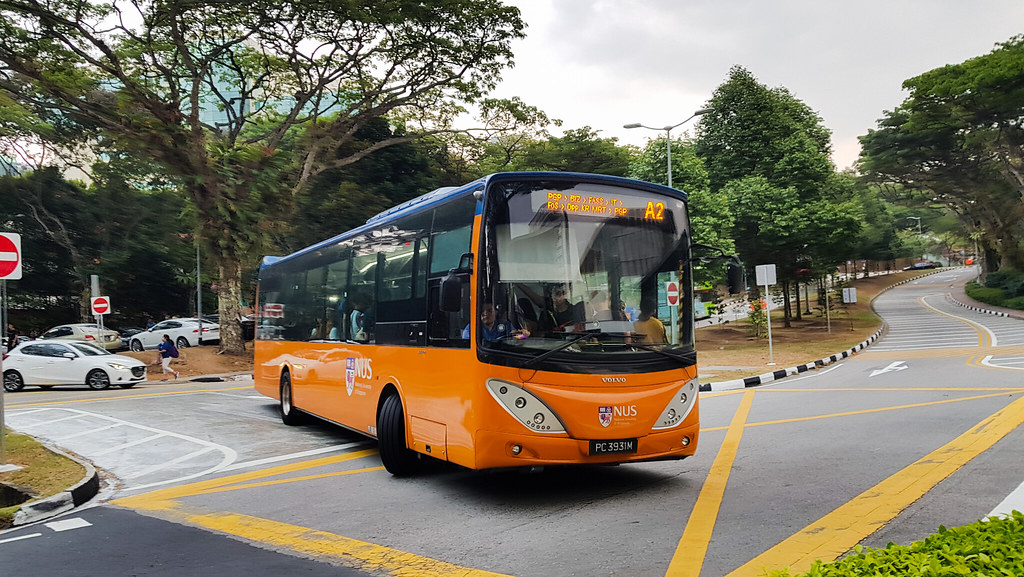 The benefit of this arrangement is also that bus captains about to do a U-turn need not worry about cars from their left, front and right – they only need to focus on oncoming cars from the front to give way to. This means less stress and more focus on delivering a smooth ride, and checking for pedestrians crossing the road.

The original issue of overlapping U-turns was raised internally at NUS Office of Estate Development meetings, for study to improve traffic flow. During a late-June meeting with the various offices under UCI that I was invited to, I supported the idea of converting the U-turn to one-way, since U-turns in the other direction can be accomplished at the College Link Roundabout which has been around since at least 2011.

To be honest, I don’t remember if that was something they were already considering or if I had raised it as an original idea, but in any case we were in agreement that this was a possible solution. I am glad to see that it has now been realised.

One thought on “U-Turn at Museum Now One-Way”