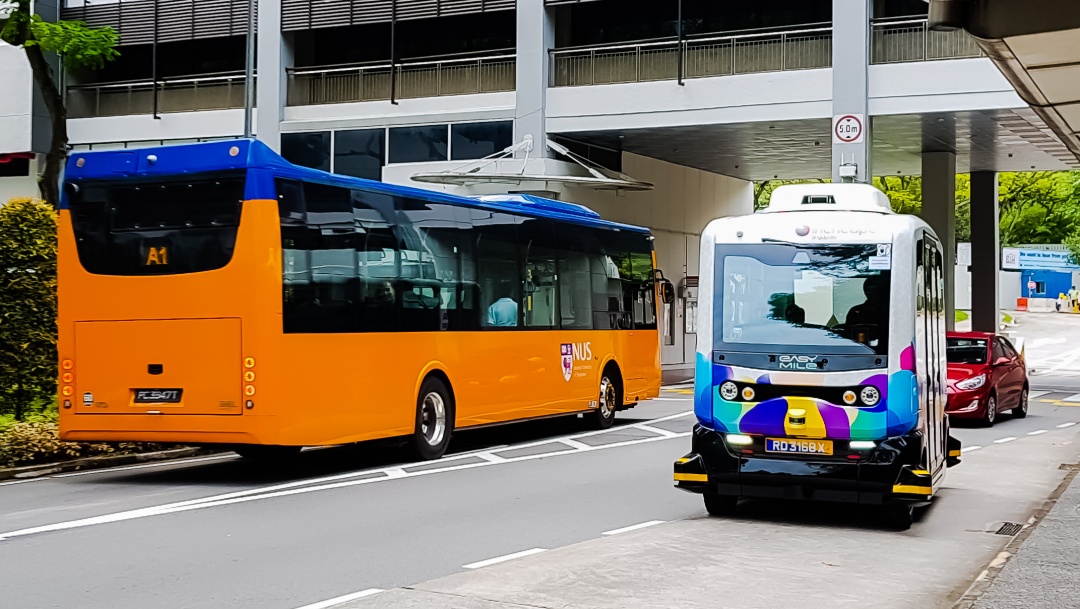 In 2019, NUS embarked on an autonomous vehicle trial on campus involving a shuttle bus. The NUSmart Shuttle, as the bus is known, was the first autonomous shuttle to be operated in real mixed traffic conditions by a land transport operator.

The trial was conducted by NUS, ComfortDelGro, Inchcape and EasyMile. More information on the trial can be found here.

As part of the trial, an EasyMile EZ10 was used to ply a 1.6km route, known as AV1, which originates at innovation 4.0 on Business Link and loops at 29 Heng Mui Keng Terrace.

Passengers could transfer to the rest of the ISB network at BIZ2 or Opp HSSML. The route has a seating capacity of six people, and is wheelchair-accessible as the vehicle has a ramp and room for one wheelchair.

The route was hinted at in July 2019, and slated for introduction on 30 July 2019, following the launch of the NUSmart Shuttle vehicle on 29 July.

From the launch week, additional signage was put up at bus stops served by AV1, with a special header distinguishing it from other ISB services.

The service operated only on weekdays during the morning and afternoon non-peak hours at a twenty-minute frequency. According to ComfortDelGro, “the service hours will be extended progressively”.

Trips were free of charge, as with all other ISB services; however, they would be cancelled in unfavourable weather for safety. Most autonomous vehicle sensors (not just the NUSmart Shuttle) will be impaired by poor weather conditions. In future, following more calibrations, wet weather service may be possible.

Due to the COVID-19 pandemic in 2020, which necessitated physical distancing and working from home, AV1 was deemed a non-essential service and therefore ceased to operate on 7 April 2020. The vehicle itself continued its testing. It plies the same route, opening its doors, but not picking up passengers.