Got called back to school recently for a meeting, so I thought I’d spend some time looking out for the NUSmart Shuttle — our autonomous vehicle (AV), a partnership between EasyMile, Inchcape, NUS and ComfortDelGro. It’s currently in the road testing stage, without passengers, so it’s driving at a slow speed to collect data. But it’s already operating in a mixed traffic environment, mixing with lorries, cars and ISBs. 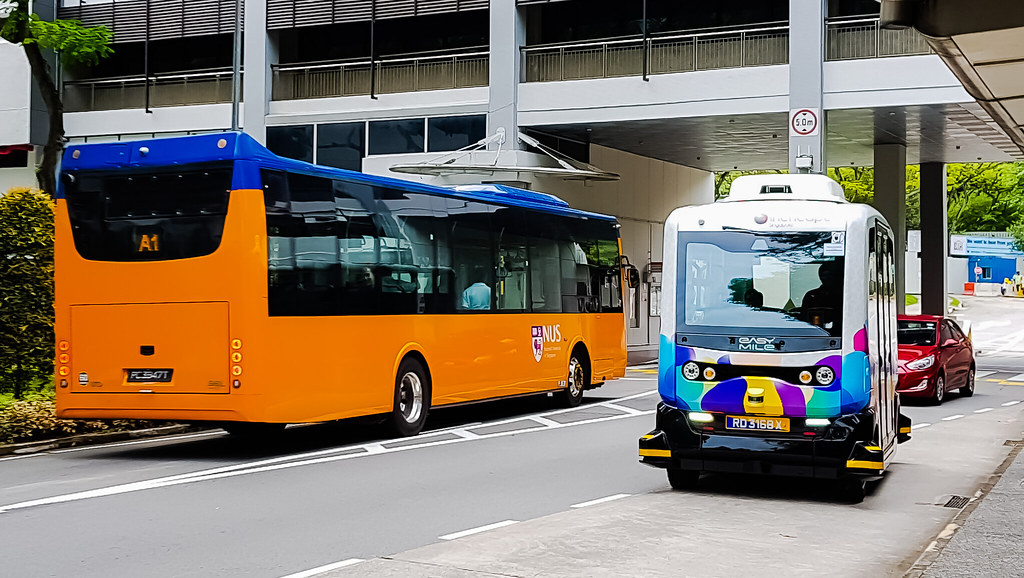 I knew that the route of the AV took it from Business Link to Heng Mui Keng Terrace, so armed with an e-scooter and helmet, I hung out at the BIZ2 bus stop.

After a few minutes of waiting without the vehicle in sight, I figured it might have gone down Heng Mui Keng Terrace, so I scooted off in that direction, reaching the junction.

However, after a while I noticed very few cars coming my way from Business Link. This was a sign that the NUSmart Shuttle was headed down the road, as it travels at a slow speed and overtaking is not allowed in these areas. Sure enough, after a while, the white AV came into sight, pulling over at the bus stop. 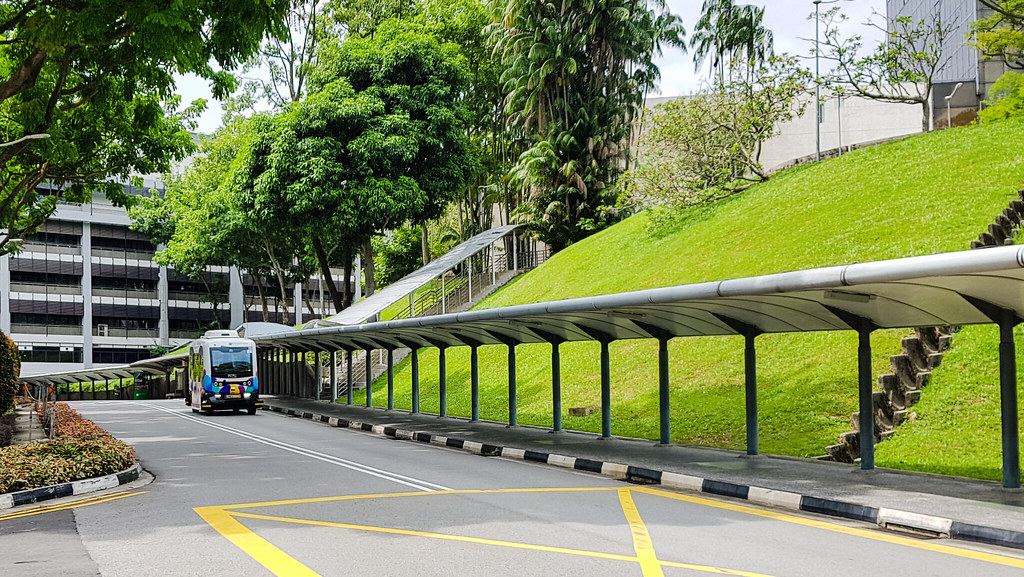 As I observed, the standard procedure during the tests is for the NUSmart Shuttle to stop and open its doors at both the BIZ2 and Opp HSSML bus stops, part of its run. This is most likely done both to test the AV’s capabilities for calling at a bus stop, and to allow vehicles to pass to avoid obstructing the road.

As the shuttle whirred away from the stop (it was electric), I mounted my e-scooter to follow it — pretty sure the operators inside must have been amused by the sight of me chasing their shuttle on an e-scooter. 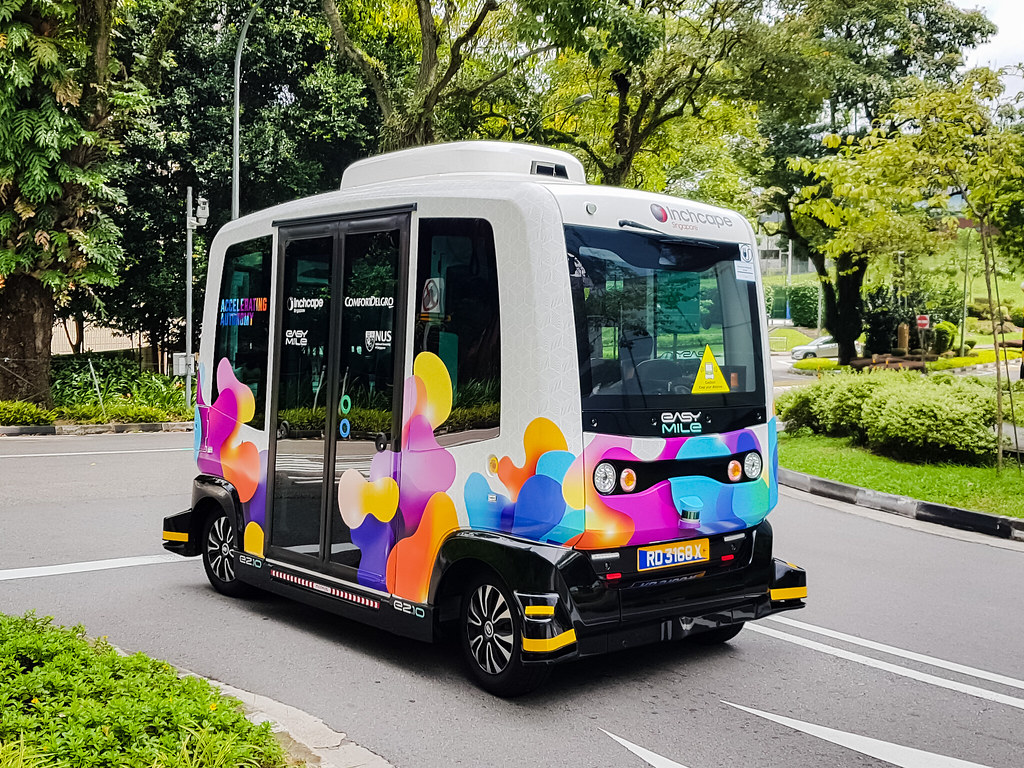 For a while, I was able to keep pace with the NUSmart Shuttle as I could continue around corners where it had to stop. However, it soon became clear that the e-scooter (with its speed limit of 10km/h) was not a feasible way to stay ahead of the bus, or at least far ahead enough to take pictures.

I ended up losing it down HMK, and when it turned back and passed me I was so preoccupied with filming it pass by (a 14-second video) that I forgot to take any photos of it along the road.

Looks like if I want to capture more photos, I’ll have to get something quicker. Or make multiple trips.

If you’re curious about the time it took — I presume it doesn’t have a fixed schedule for when exactly it departs i4, just roughly between 12pm and 3pm. But because I was taking pictures, I could get time stamps and observe the time taken. 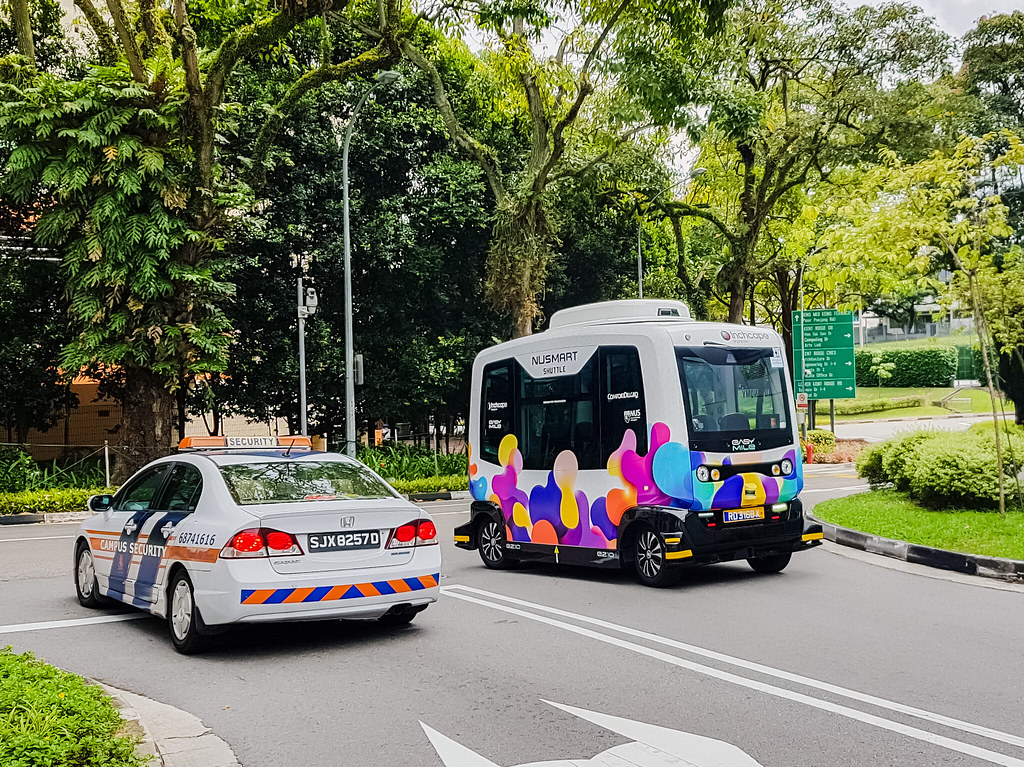 Apparently, from the BIZ2/Opp HSSML bus stop to the looping point in HMK Terrace, the shuttle only takes five minutes. However, between trips it parks around the i4 building, and that takes longer.

During this period, I observed the shuttle reversing — I’m guessing the operator was demonstrating the double-ended operation. If you look closely, the front and the back of the bus look the same. When in reverse, the light arrangement just switches over so the LEDs glow red instead of white.

I believe the EasyMile EZ10, which only has a door on one side, was designed such that it can be operated in either direction, so it can be used in both right hand drive and left hand drive areas. This can also be seen in how when it rounds a corner, all four of the wheels steer. 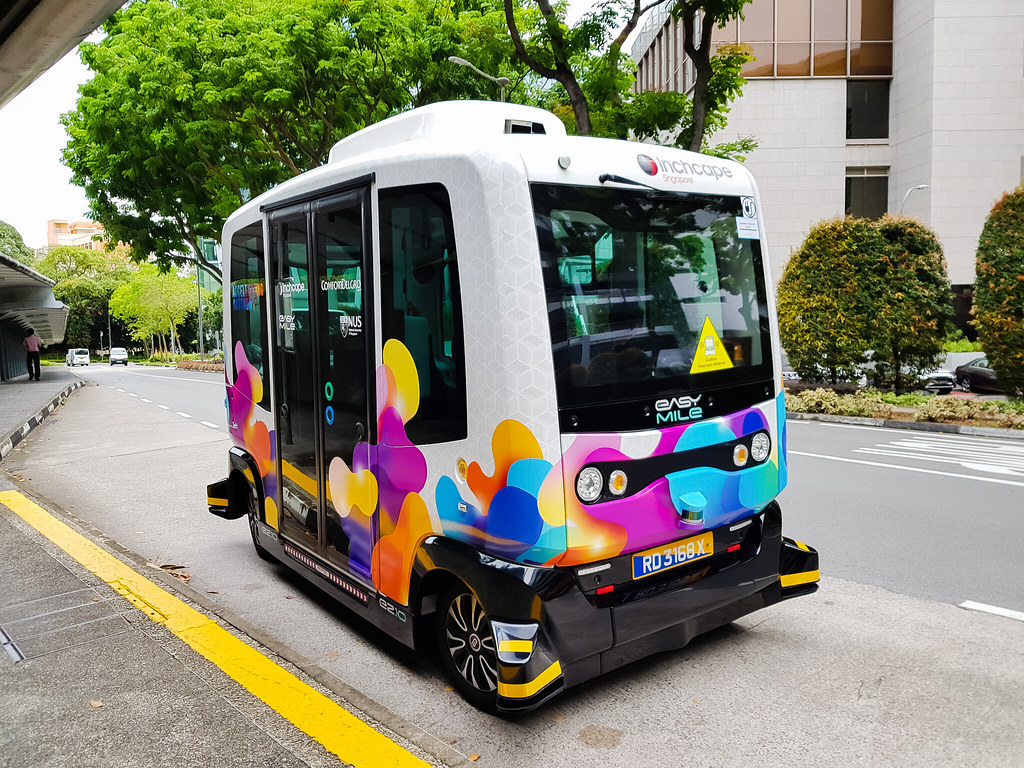 Another cool feature I noticed (or think I noticed) was the use of chimes as signals for pedestrians. I think I heard a soft bell noise whenever the AV moved off from rest — again, a good idea because the electric motor is quite silent. It reminded me of Hong Kong trams, which also ring a bell twice before moving.

Scooting after the shuttle over that half an hour, I was generally impressed by the performance from outside. I’m not sure how much of what I saw was actual autonomous driving and how often there was a manual override, but this being almost a month into the actual trial the bulk of it should have been autonomous.

I did observe the shuttle taking a longer time to exit the Opp HSSML bus bay than a normal car would — this is likely because it was in autonomous mode and thus carefully finding a big enough gap to exit.

Also, at one point a van had parked in front of Sheares Hall, blocking the road. The NUSmart Shuttle paused behind it for quite some time, regarding it as an obstacle. I was about to dismount my e-scooter and try to contact the van driver, when I saw the shuttle operator engage the manual override and overtake the stopped van. I completely forgot the manual override existed. 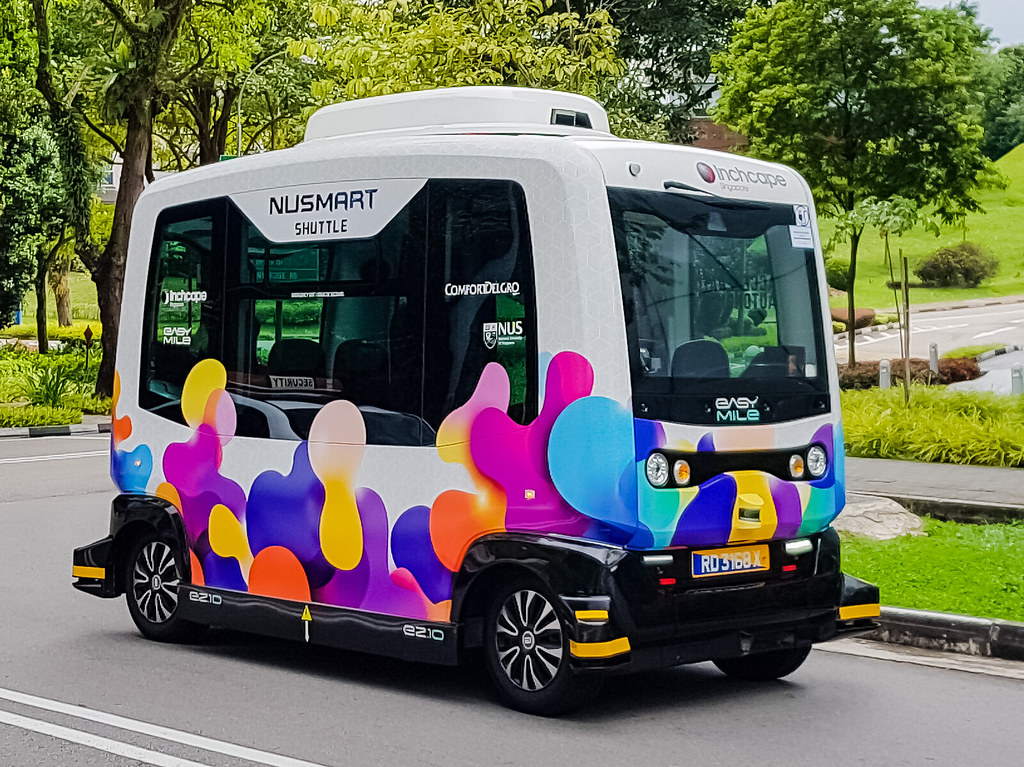 Generally, though, the NUSmart Shuttle was able to navigate challenging routes with ease, and react smoothly and gently.

Here’s wishing Inchcape, EasyMile, ComfortDelGro and NUS all the best for the trial! 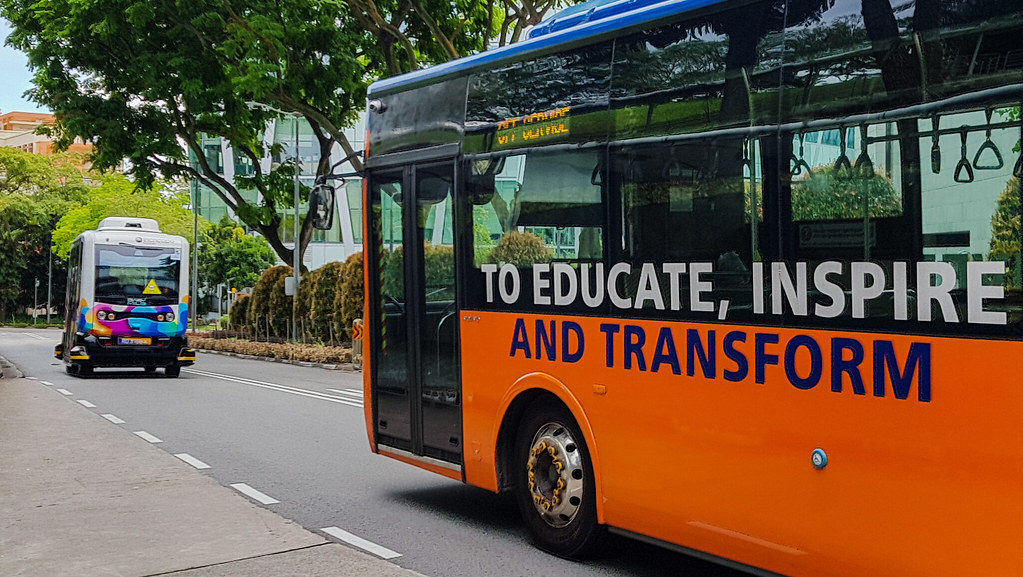 One thought on “First Look in Pictures: NUSmart Shuttle”