I need to issue a correction. Previously, I had written that OCA discontinued the practice of providing maps of the ISB routes for a period of time, and switched fully to giving only a list of stops.

I apologise, as this is factually incorrect. As it turns out, throughout 2014-2016, even when OCA introduced stop listing graphics, the 3rd-generation maps (like below) continued to be accessible through links on the website.

And in 2016, when OCA shifted to their new website and updated the stop listings to a clean, minimalist (though with drawbacks) version, a new fourth generation of maps were created, which I was completely unaware of.

These maps were very easily accessible via a quicklinks section at the bottom of the OCA website, which would be present on any page. This section managed to slip past my notice when I was going over the archived pages. 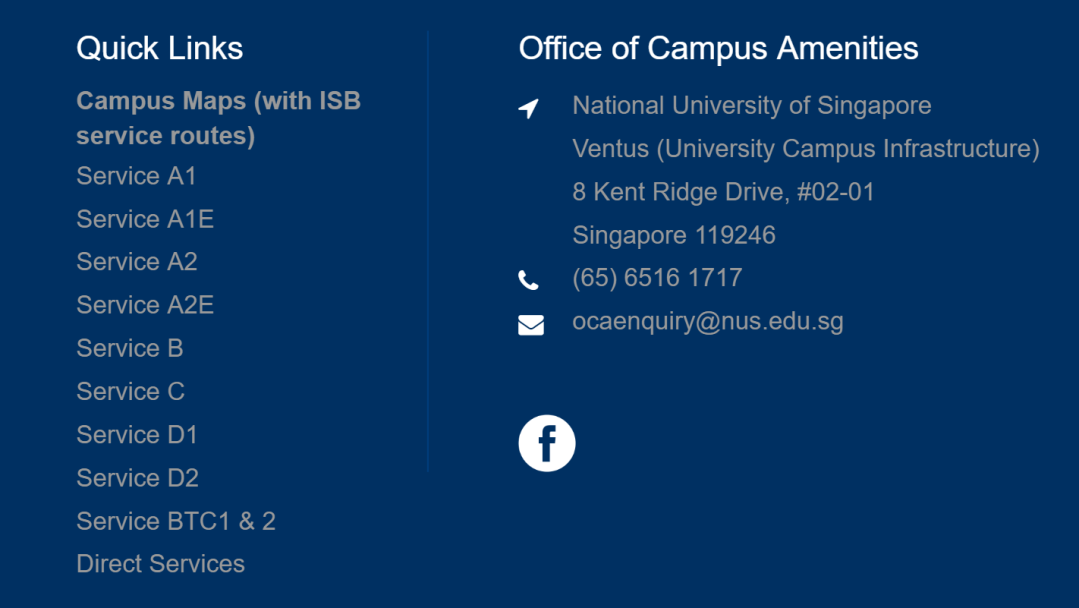 This fourth generation of maps in fact served NUS until around the start of AY18/19, as OCA shifted to the UCI website and thus lost that section of quicklinks. This apparently went unnoticed, until I raised it on NUSSU’s behalf in a November 2018 meeting.

As such, I cannot take credit for the design of the current series of PDF maps that are in use as of today, as they in fact inherit from this fourth generation of maps. You can see the similarities for yourselves – an example of the fourth generation is shown below.

I can, at most, take credit for the reintroduction of bus route maps to the website, and for the integration of the stop listing into the map. Thanks to OCA as well, for following up with the enhancement of the maps.

I apologise for the inaccuracies thus stated, that there were no maps between 2016 and 2018. That was fake news. The relevant articles (route histories, and history of network maps) have been progressively updated to reflect this. In some cases, it has helped to complete the picture of the route histories as well.

Links to the relevant articles are found below: