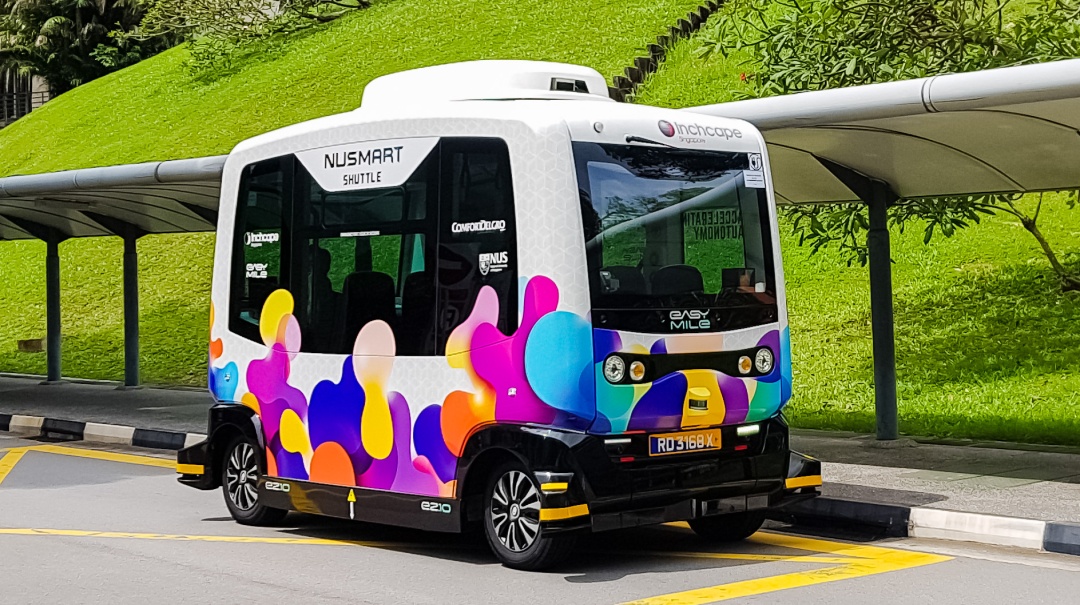 Hold your horses, though. Before we get all excited, let’s remember that this is not exactly an autonomous ISB, and won’t be replacing your daily A1/A2 commute just yet. What this is, however, is a trial by NUS, ComfortDelGro, EasyMile and Inchcape on the viability of commercial autonomous bus services.

Pictures of the bus used have emerged – the NUSmart Shuttle, as has been previously reported, is an EasyMile EZ10, which follows a predefined route and is equipped with sensors to detect and avoid potential obstacles.

Not only is it designed to be autonomous, it’s also 100% electric (it runs on battery power). Score one for environmental friendliness!

EasyMile is a French company, founded in 2014 by Ligier and Robosoft Technology. The 4-metre-long EZ10, which can carry up to 12 people in Singapore, is designed for light city transit. Conquering the hilly, winding roads in our campus will certainly be a challenge for its engineers.

Nevertheless, it is currently the most deployed autonomous shuttle in the world with over 230 sites in more than 26 countries!

Previously, an EZ10 was one of the first autonomous vehicles ever tested in a public area in Singapore – one entered service as an “Auto Rider” shuttle in Gardens By The Bay, who produced a document elaborating on its special autonomous features.

The NUSmart Shuttle unit carries a unique blue and yellow license plate, RD3168X (later replaced with RD3173E). This type of special plate is used on vehicles constructed for Research and Development purposes, hence the letters RD. Other RD plates can be found on various other electric and/or self-driving vehicles in Singapore.

To clear things up, the NUSmart Shuttle will not actually ply that much of the ISB network, as it will be running on a 1.6 km route between the Innovation 4.0 (aka i4.0 or i4) building at Business Link and the Energy Studies Institute (ESI) at Heng Mui Keng Terrace.

According to the press release, the shuttle will undergo a 1.5-month long road test first, in order to map out the route it needs to take. This mapping process will see the bus travelling at a lower speed between 5 to 16 km/h, to capture as much route data as possible for “calibration”; it will also not carry any passengers.

After mapping, there will be a validation process – still sans passengers – in which it will run for three hours daily over a four-week period, to ensure that it is capable of autonomous movement with the map data collected.

Finally, in 3Q 2019 (maybe some time after the semester starts), passenger service trials on the NUSmart Shuttle will begin. During these trials, the bus will still be manned by an operator, who will ensure safety and provide information to passengers.

I do not have more details, but around that time, there will be more publicity from NUS and likely NUSSU. Stay tuned!