In spite of a pre-recorded announcement telling students not to eat or drink inside ISBs, it is apparently still a perennial problem.

Many of us still take our food and drinks onto the bus — inevitable, really, given that we are constantly rushing from one place to another which necessitates the bus in the first place.

I think one reason for this is that unlike public buses or trains, somehow we don’t have stickers inside the buses warning of fines for consuming food or drinks on the bus, but only an announcement. One bus has stickers inside, but I have a feeling the driver pasted them himself.

A 2013 video captured, for a split second, a set of signs which disallow food and drink. From the details in the bus, that seems to be a Scania K230UB. The space where those signs are is now occupied by the wi-fi information sticker, so perhaps the signs were removed then. In any case, the current buses don’t have signs, likely because the operators wanted a cleaner image for the inside of the bus (how ironic) instead of somewhat unsightly laminated plastic everywhere.

Legally in NUS, it is a sort of limbo also. I am not aware of any fine for food or drinks on a bus, or who might enforce it. So many students — presumably the same ones who don’t realise we need to press the bus-stopping bell — simply bring their food or drinks into the bus, assume it is permissible and consume them.

What we don’t see, however, is the effort that goes into cleaning up the bus after every incidence of a spill.

The duty of cleaning our buses falls to the drivers. Not the cleaners, not other bus company employees, but our drivers themselves. After each trip, the bus driver has to go over the bus for lost belongings and spilled items.

When our drivers have to clean the bus up, this naturally eats into their break time. Of course, the break time they have between trips does include time given for them to tidy up the bus to make it look presentable.

But over the course of a day, if you are constantly bending over, straining your back, cleaning up food waste from your bus floor — waste that was spilled by the people you are transporting around — it eats at your morale.

Many of our drivers are older in age. They do find it very painful to be bending over constantly. One of them I know gets around the issue by carrying around a broom and dustpan to clean the bus between trips. Another uncle I know of installed rubbish bins inside his bus, but nobody really uses them.

Drink spills are an even bigger problem. Just think about it. When you spill a liquid inside the bus, that liquid is going to flow as far as it can.

And this is NUS.

Our slopes tilt the bus in every direction possible over the course of its route. By the time the bus finishes and goes for its layover, every square inch of the floor will probably be covered in Gong Cha or kopi-O or whatever you brought onto the bus. 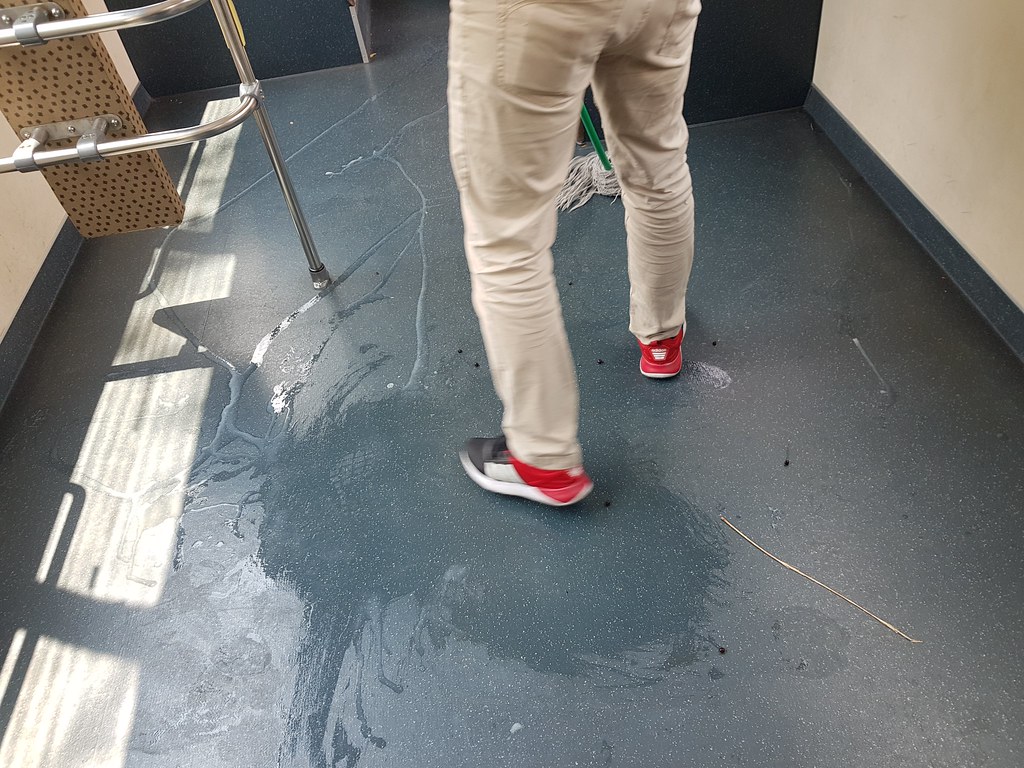 This is bad. If left unattended, sugary liquids will not only become sticky but attract lots of pests like ants and cockroaches. Imagine the freakout you would have if a cockroach appeared on your seat.

Since liquid spills take such a long time to clean, sometimes the bus drivers will have no choice but to pull the bus out of service for one trip and clean the whole floor while someone scrambles to replace them. Not always successfully. The next time you wonder why a bus seems to be missing and leaving a longer gap between buses, it’s probably because it experienced a catastrophic spill.

So I implore all of us as commuters to be more considerate the next time we bring food or drinks onto the buses. Just don’t consume them. Cover them. Not just for the sake of our bus uncles, but for each other as well.

We are university students. We can do better.