The Central Forum (CLB and IT)

The pair of bus stops known as Central Library (CLB) and Information Technology (IT), formerly Computer Centre (CCE) are a key transport node for NUS. They were the original site of crowding in NUS, since bus 96 to/from Clementi and bus 95 to/from Buona Vista both stop around this area. In old documents, this corridor is known as Central Forum.

The Central Forum itself actually refers to the wide open space under the CLB. I recall some faculty or faculties had their Rag practice here.

Before we had Kent Ridge MRT, most outbound students alighted here to transfer to SBS buses to reach the outside world. These two bus stops currently serve three faculties: Engineering, FASS and SDE, which is why the loading is still heavy despite the opening of Kent Ridge MRT on the Circle Line.

Originally, this is what both of them looked like (CCE and CLB respectively): 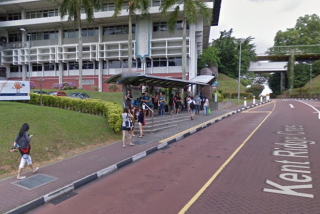 The two bus stops were basically mirrors of each other. Both were small, sheltered bus stops built upright on a slope, so half the stop consists of steps.

The Central Library bus stop was replaced on 10 July 2016 with a new bus stop located at AS8. AS8 was a new building located on the site of the former Block ADM, and the CLB bus stop was thus shifted down the road and integrated into it.

The bus stop now looks like this — with much bigger capacity.

The new bus stop was given a shoutout on the Ridge, the NUSSU publication. The ambiguous wording below gives me reason to wonder if the relocation was delayed to August, or whether they were simply referencing the opening of a new semester.

Across the road, the Computer Centre bus stop was renamed to Information Technology in 2017, together with the renaming of the building itself. For that reason, you will see this bus stop being referred to variously as Computer Centre, Com Cen, CCE and IT.

However, it never received an upgrade and has been the same stop all this while.

There is now a significant problem. While the pair of bus stops (CLB and IT) are a key transport node, each of them serves a different function.

The CLB bus stop mostly handles the offloading of passengers heading to lessons. Most passengers alight here, having come from UTown (B1/D1) or from Science/MRT (A1/95).

The IT bus stop mostly handles waiting passengers who want to head away from the area, either towards UTown (B1/B2/D1) or the MRT stations (A2/95/96).

So it does not quite make sense for the CLB bus stop to be significantly better equipped to handle large crowds than IT.

At CLB, most passengers immediately disperse as they walk off to CLB or FASS or cross the road. However, at IT, three faculties’ worth of people are waiting for buses. The crowd usually spills out of the bus stop, onto the sidewalks, road or up the stairs. This is a potential safety hazard especially when crowds spill onto the road. It also reflects poor design.

The best way to fix this issue would be to redevelop the IT bus stop to better handle crowds, or perhaps encourage students to wait at CLB instead… somehow.

Currently, most students prefer to reach KR MRT from Central Forum via A2 (which stops at CCE/IT) because it is a direct bus as opposed to A1 where passengers must alight and reboard. Some route planning could divert demand to the CLB stop, but that will be difficult due to certain route constraints, which I promise to elaborate on in a later article.

Also, we know that the Engineering canteen, Techno Edge, is being renovated; perhaps we should take this opportunity to renovate the IT bus stop as well. This is something I will look into.

3 thoughts on “The Central Forum (CLB and IT)”